Our new president gets down to business 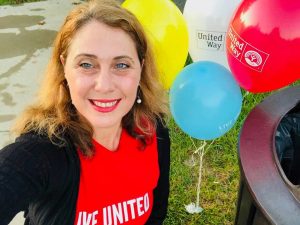 The first few weeks on the job for Ravi Respeto, the United Way’s new president, have involved a lot of listening.

The first order of business was to meet with all 45 United Way board members.

“They’re our ambassadors,” Ravi said. “They have a lot of passion for the mission of the United Way. It was important to me to understand why they are involved, what they hope to be able to do, and where they saw the pulse going in the future.”

Ravi also met with stakeholders from nonprofit agencies. There are about 600 nonprofits in the Charlottesville area, and the United Way touches many of them.

“I’m learning how they work together and how they dovetail into a lot of the work United Way does,” Ravi said. “We have a community of people who are absolutely committed to making Charlottesville the best version of itself. They work tirelessly in ways I don’t think people quite understand until you take the time to go tour their nonprofit and meet the people they’re serving.”

It’s a great example of the United Way’s unique ability to convene stakeholders and marshal resources to support a worthy cause.

“The United Way is able to bring people like Pam to the community,” Ravi said. “We’re able to attract funding on the state side, with the Virginia Early Childhood Education Foundation, and stream those funds back locally. Then we look at our partners that work in this field and figure out where the funding needs to be placed.”

Do perceptions of the United Way match the reality?

“People understand the United Way through the lens of their own involvement with it,” Ravi said. “For some people that might be the national brand. They might hear `Live United, ‘and they may not fully understand how that statement relates to our local community, but they think, `Oh, they do something good to serve locally.’ ”

Ravi wants the community to have a clear understanding of how the United Way operates locally and to see the end result of our activities and initiatives.

To promote healing in the aftermath of August 12, the United Way held a Community Table event at the Jefferson School City Center. The October 2017 event drew 700 people of diverse backgrounds to share a meal, meet and get to know someone new in their community, and find common ground.

Now the Community Table concept will take on new life, with a series of small-group events. The idea is to duplicate the spirit and diversity of the first event with community tables of six to 10 people who will discuss key issues in the community and find ways to work on solving them.

“The United Way has a definite commitment to gathering people and convening around the social justice/social equity lens,” Ravi said. “The United Way has 75 years of legacy of not shying away from the most difficult social issues that exist in our community. We have this incredible platform to convene people around a table and to look at how we solve those issues.”