A Hot Time Round the Track 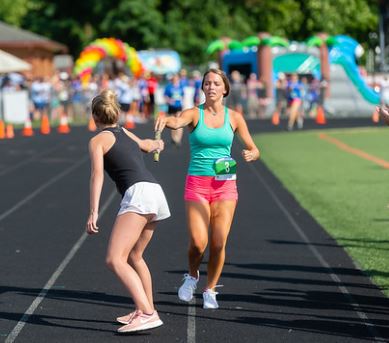 It was a hot day for Relay 4 Community Health, a race in its third year and now a partnership between Piedmont YMCA and the United Way-Thomas Jefferson Area, but it was a strong day. Despite temperatures being over 90 degrees, 37 teams competed for glory across four divisions: Family/Friends, Business/Organizations, Competitive, and Walking. Ultimately, there were even two records set with The Rojas Stevens Company boasting an impressive 11:10 in the business/organization 4×800 division and the YMCA Livestrong team boasting a 13:06 in their 4×400 walk.

Also winning was Coul Runnings in the Family/Friends division with 13:01 and Team Stew in the competitive division securing their victory with a time of 9:53. While the competitive division blew by with all three teams coming in at 10:05 or faster, we have to admit everyone looked speedy from the vantage point of the bouncy house, sprinklers, and an obstacle course at this island-themed event.

Thinking of competing next year? Grab three friends and start training. The race is 800 meters or two laps around a track before handing off the baton to a teammate. Sounds like an easy way to put not just your health first but also to prioritize the community health goals set by the Piedmont YMCA and United Way.