Honoring Trailblazers of Generations Past

The United Way has established giving circles that are named after heroes of generations past. The giving circles recognize donors who provide significant levels of financial support.

In the past, our circles were named after the presidents who called Virginia home. While we still have a Presidents Circle, we now have circles that honor a more diverse group of community leaders.

“Mr. Tonsler and Ms. McGinness worked steadfastly on behalf of our community, in spite of all obstacles, to impart lessons of leadership and resiliency to the next generation,” said Daisy Rojas, the United Way’s Director of Development. “We honor Mr. Tonsler and Ms. McGinness as two important representatives of those who consistently give of themselves offering their time, talents, and knowledge to lift up others.” 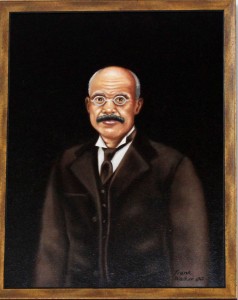 Born into slavery in Albemarle County in 1854, Benjamin Tonsler learned to read and write even though there was a law that prohibited the education of slaves. He graduated from what is now known as Hampton University where he was a classmate and friend of Booker T. Washington.

Tonsler was the principal of the Jefferson School from 1895 until 1917. At the time, African Americans could not legally attend school past eighth grade. Tonsler, at great risk to his career, secretively taught advanced classes to older students, including one Rebecca McGinness. Many of these students moved on to college.

“When the superintendent would come around to the class for a visit, Professor Tonsler had us hide our high school books,” Ms. McGinness told The Daily Progress in 1991. “When I went to Hampton Institute, I used the same English and history books he had taught me from.”

A community leader until his death in 1917, Tonsler is remembered in an exhibit at the Jefferson School African American Heritage Center. His house on Sixth Street SW is on the National Register of Historic Places. Tonsler Park in the Fifeville neighborhood is named in his honor.

Rebecca Fuller McGinness was born in Charlottesville in 1892. She was a teacher at the Jefferson School from 1915 to 1960.

For more than a century following the Civil War, The Jefferson School was the heart of the African American community and the mainspring of its achievements. Educators like Tonsler and McGinness fought against the presumption that African Americans should only be schooled in the “industrial arts,” rather than academic subjects. They provided a “classical” education that prepared students for college and gave them an opportunity at upward social mobility.

In 1999, The Daily Progress named McGinness as one of our community’s Distinguished Dozen of the 20th Century. Charlottesville City Schools honored her when they created the Lugo-McGinness Academy, the city’s alternative education center. She died in 2000 at the age of 107.

McGinness was known as “Mother McGinness” to generations of students, her First Baptist Church family, and friends throughout the community. Her starting salary as a teacher at the Jefferson School was $30 a month, part of which she used to buy school supplies. She cared for students as if they were her own children and considered them to be her biggest accomplishment.

“In my days of teaching, the teacher was the mother, father, nurse, and cook,” she told a Daily Progress writer. “Every morning we would cook up a big pot of soup or a big pan of oatmeal so that kids could eat.”

Her mentors at Hampton emphasized that students should be taught to help others. It’s fair to say that her students learned that lesson by the example she set. Many former students visited Ms. McGinness after her retirement to thank her for the life lessons that they were passing on to their own children.

To learn more about the remarkable life of Rebecca McGinness, read Rebecca Fuller McGinness, A Lifetime: 1892-2000, by Florence Coleman Bryant. Or watch the documentary film In the Fullness of Time, which was narrated by Rita Dove.

“Just remember me as one woman who enjoyed life and gave it back to people, to youngsters,” Ms. McGinness says at the beginning of the film.

Elizabeth Howard, the producer of the film, told The Daily Progress that she met with Ms. McGinness a few days before her death.

“She continued to contribute to the end,” Howard said. “She said, ‘Do something good for somebody every day.’”

The Tonsler-McGinness giving circle is for donors who contribute $2,500-$4,999 to the United Way-Thomas Jefferson Area annual campaign. We invite you to learn more about the many ways to give to the United Way.